Where honor, chivalry, physical elegance, grace, poetry in motion, beauty, force, flow, masculine and feminine are all explored, with one foot planted in the past, and one hand firmly gripping the sword.

Come experience the thrill of swordfighting, the camaraderie forged from combat, and the profound joy of self-discovery.

Welcome to the home of Fight Like a Knight. Fight Like a Knight (FLaK) is Los Angeles’ premier school of authentic medieval combat. Taking techniques informed by historical documents, cultivated through thousands of unchoreographed, full-speed, full-contact engagements, and imbued with modern-day kinesthetics, students learn a highly-dynamic, period martial-art that is unavailable from any other school of the sword. 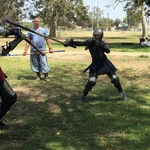 FLaK combat is executed using either rattan or polypropylene (at opponent's consent) weapons. This simulates the weight and feel of a steel sword, without incurring the dangers of using a waster or live-steel, allowing FLaK combatants to fight intensely and realistically with greatly-reduced risk of injury.

Weapon strikes are calibrated to penetrate or damage armor enough that the underlying "meat" has been injured or ruined. Thus, FLaK weapon strikes are quite forceful and akin to getting hit with a baseball bat. Understanding how to deliver as well as how to take a blow is crucial to the learning process. Students will pick these skills up during sparring practice or classes where strikes are delivered to armored areas.

Fight Like a Knight follows a series of rules and customs that, while making the engagements slightly less realistic, keep combatants safe and prevent thuggishness. FLaK technique emphasizes the beauty, elegance, and grace inherent in swordfighting, and our rules and customs reinforce that as much as possible.

In order to keep combatants safe and uninjured, FLaK members agree to abide by the following customs:

Arms, while inevitably getting hit on occasion, are never targeted - too much bone close to the surface that can easily be broken even through adequate armor. Knees and below are also never targeted for the same reason as above. The recipient of the blow has the final say in the quality and efficacy of the blow. Shields will never touch your opponent’s body. Basket-hilts/hafts will never touch your opponent’s body. A fallen opponent is asked to yield rather than be attacked. Slow-work and sparring will only go at the speed and intensity agreed upon by your partner. 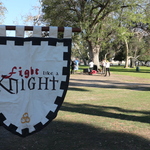 The FLaK Precedence is similar to the Eastern martial arts’ belt system, existing to provide students with goals and a way to measure progress through the program. This document describes the various levels of achievement that can be attained through training with Fight Like a Knight, as well as their respective titles, which track an individuals standing within the clan.

The timelines of the levels are fluid, in that the estimated time spent at each level may change depending on the dedication to practice, focus on technique and, ultimately, the skill of the warrior. The Hersir (Knight) will offer the examination when he/she feels the student is ready to progress.

While it is the Hersir’s sole call on whether or not a fighter passes a test and advances to the next level. The tests are given in a group setting and require a consensus before the accolade is granted. This is a core element to the FLaK Precedence, allowing the community to weigh in on whether it accepts the candidate at the sought level or not, demonstrating to the candidate that his/her peers see him/her as ready to move forward as well as being a potential inspiration for those lower in stature. This mutual acceptance is paramount to our values, and each member knows that he/she has the full support of the FLaK community behind each of their accomplishments.

Successfully completing the exam to become a Thrall will garner a leather cord from which the student’s chain will grow. At the Folc level, the student will be taught the technique to craft the rings into our Chain of Station. From that point forward, with each new exam that is successfully completed, a new title will be bestowed, as will the rings necessary for the candidate to craft his/her next section of chain. The Chain of Station will be complete upon successfully obtaining the title of Thegn.

Passing a test should feel like an achievement, pushing oneself to master the level’s forms, technique, and weaponry. Not passing a test should never be construed as a failure, but rather an opportunity to discover areas that need refinement. If the candidate does not pass a test, he/she should accept feedback from the Knight and his/her peers with the same humility and respect with which it was delivered, rising to the challenge or growth, seeking to improve the identified areas, rather than seeing a fault or failure. For we are stronger together than any individual is alone.